Recently, the BC government has put restrictions on salmon fishing due to the decline in our resident Killer whale population. The latest estimates put the total population of southern resident killer whales at 76. 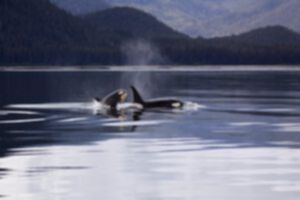 We have two species of killer whales, one is the resident whales, the other are transient whales. Transients feed upon seals, sea lions and porpoises but the resident whales actually get along quite well with all the species that are part of the transient diet. You can see them swimming together on numerous occasions. Residents feed on salmon, in the last several years, salmon numbers have declined drastically due to sport and commercial fishing leaving the whales with less then an adequate diet. There is a great need to try to do everything we can for them and help them to thrive again.  The closures are part of a larger program unveiled last week intended to reduce the total harvest for chinook salmon by 25 to 35 per cent. Chinook are the primary food source of the endangered southern killer whale population

Details vary for each area, but in many cases, recreational fishing is completely banned in the areas from June 1 until Sept. 30, while commercial fishing for all salmon is banned. Closures came in effect this week and will vary in areas where the resident killer whales are present.

Closures include parts of Juan De Fuca Strait, the southern Gulf Islands and the mouth of the Fraser River. You can see where the closures are on a map at the fisheries management site here

So, we will respect the whales, there are other areas in saltwater fishing that are open and halibut, cod and snapper are pretty tasty too. Also, Fishing BC has a very useful app for your cell phone. To help you find out where they are and also all the rules. Android app is here and the iphone app is available at itunes.

There are many lakes and rivers that provide. First off you will need to purchase a license. They can be purchased online here.

You can also buy a freshwater fishing licence:

Char, pike, walleye and many species of trout can be found in most areas. Need to know where those areas are? Check out this page for great information about what and where.

BC Seafood Festival – Bigger then ever.

Meeting up with wildlife. What to do?